My time with the BCO, Ken Shuttleworth 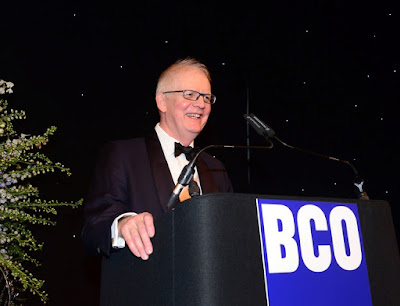 At the BCO annual general meeting last evening, I was honoured to pass on the mantle of the BCO presidency to Katrina Kostic Samen, founder and managing partner of KKS Strategy. I know she’s got big plans for the organisation.

Before I get back to my everyday life at Make, though, I’d like to reflect on my time with the BCO. Since being nominated to become junior vice president in 2015, I’ve had a fantastic few years with the higher echelons of the BCO. My first task was to help shape and lead the last plenary session of the 2016 conference in Amsterdam; after that it was to organise the 2017 conference in London. A monumental task, I quickly realised!

Despite the plentiful challenges of pulling together a 3-day event for over 500 delegates in a city everyone thinks they know already, I’m confident the ‘London Refocused’ conference was a great success. We had tours of more than 40 workplaces and talks from celebrated designers, experts and thinkers such as Juliette Morgan, the now-former head of the Futures Group at Cushman & Wakefield, former US diplomat James Rubin, workplace transformation expert Despina Katsikakis, and Paul Chong, director of IBM’s Watson Group. And of course Lord Foster as the keynote speaker – an absolute highlight for me and many others.

Key themes to come out of the event included placemaking, flexibility and sustainability, as well as the influence of technology and the growing trend of wellbeing in commercial environments. These are all topics we’re thinking about at Make, and I’m excited to see how all of us in the industry can contribute to evolving and progressing them in the coming years.

Since the conference, I’ve visited BCO regions around the UK to meet with the committees, attended key events such as the President’s Lunch and the Annual Dinner, and helped create and oversee the NextGen competition, ‘The Office of 2035’. With regards to NextGen, I think it’s incredibly important for us to bring forward the next generation and provide the BCO with a ‘refresh’ to encourage younger and more diverse members.

In August 2017, during a visit to the Make Sydney studio, I gave a breakfast presentation at Cushman & Wakefield on the key takeaways of the London conference. The success of this event, and seeing how interested people were in what’s happening in the UK, got me thinking about the importance of increasing the BCO’s global reach. It’s evident that we are seen as leaders in workplace design around the world, so we must keep working to remain that way. I think expanding our presence beyond our borders will be an important part of that.

In February of this year, I also launched the President’s Survey to help shape the BCO’s agenda going forward. The feedback – from BCO members – was incredibly instructive. A number of common themes surfaced, from which we formulated four key recommendations that we presented to the board:
Increase gender and ethnic diversity
Explore avenues of greater global engagement
Increase consultation with members
Increase use of technology, including digitisation of the BCO Guide to Specification

Richard Kauntze, BCO chief executive, has said they will be progressing the recommendations in the weeks and months ahead.

At this year’s successful Berlin conference, Katrina announced her plans to focus on designing more inclusive workplaces as well as to push for greater diversity within the BCO itself, causes I both applaud.

As for me, I believe that if the BCO is to remain at the cutting edge of office design, particularly in a post-Brexit landscape, it will have to adapt quickly and be responsive to members’ and market demands.

It of course remains to be seen what the full effects of Brexit will be, but for the time being, I hope the BCO will show the world that we intend to stay a global hub for business, and will keep helping to create world-class workplaces for companies that want to be here.

At next year’s Copenhagen conference, we’ll delve into work-life balance, another important issue in our modern life. I’m looking forward to that as well.

But for now, it’s been an absolute honour to have been a part of this institution, which has formed the bedrock of UK workplace design guidelines for nearly three decades. It’s produced fantastic work over the years, but I firmly believe that the best is yet to come, and wish Katrina the very best of luck for the coming year.

Originally published on 12.07.2018
By Ken Shuttleworth on www.makearchitects.com